Follow-up to this post, and it only took me two months! Must be something I ate.

Anyway, same deal as last time, except I'll be covering the playable alien species included in The Star Wars Sourcebook. The overall list is rather similar to that in the later d20 rules, though obviously it doesn't have any species that were invented for the prequels; a few omissions are a bit strange, though. But nowhere near as strange as what the W.O.T.C. decided to do with some of their miniatures...

I actually quite like these burly folks, and at one point considered getting a bunch of Gamorrean minis to use as orcs in my D&D game (back when my setting had orcs, but that's another story). Unfortunately, I soon bought both of the suitable minis; the other two are either armed with a blaster rifle, or mounted on a big square base that says STAR WARS on it. Considering they've been playable since the 80s, and moved up to a core species in d20 Revised, it's a bit odd that the minis of them are so samey.

Another oddball species that doesn't get enough love in my opinion. Binaural speech, reverence for plants, what's not to like? Sadly, there were only three Ithorian minis ever made, and one of them was only available in a Scenario Pack.

Now this is podracing more like it. A frequent background presence since their pivotal role in the original Star Wars, these freaky little hooded creatures are strangely absent from the d20 Revised Core Rulebook as player options. There's a decent variety of minis, though, and since their faces and features are always hidden anyway, I wouldn't mind having a couple duplicates on the tabletop if need be.

A frequent background presence, but rarely given speaking roles outside of the Expanded Universe, their tightly-bound history with the Mon Calamari is honestly pretty fascinating, if not always handled in the best way. Not sure if I could call these folks a "fan favorite", but they could stand to have a few more minis to their name.

Oof... When I said the Sullustans got shafted, I wasn't kidding. And this despite one of their members being a named character, Lando's copilot in Return of the Jedi, no less! When even Wedge Antilles has two different sculpts, and poor Nien Nunb only has the one, you know you've screwed up somewhere. I'd hate to be the one to play a Sullustan character in the d20 game, only to find that you've got two entire minis available to choose from.

Another species that got demoted between D6 and d20 Revised, this one at least kind of makes sense. After all, a Jawa or two could certainly find themselves on a smuggler crew trucking around the galaxy in search of loot, but nearly every depiction of Tusken Raiders shows them as aggressively isolationist - even more so than the Shistavanen, who at least move in the same circles as other fringers. Thankfully, one of the Tusken Raider minis has them paired with their Bantha, something I greatly appreciate.

Last but certainly not least, the denizens of Ryloth. Even though there aren't that many of these minis, the sculptors and painters gave us a pretty good range - different skin tones, different clothes, masculine/feminine/androgynous builds, etc. 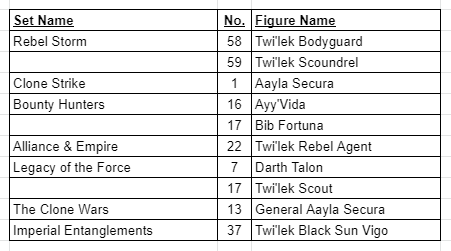 Should a Part 3 show up, it'll cover those from the d20 Revised Core Rulebook that haven't already been covered here - among them Gungans, Trandoshans, and (my favorite) Duros. Stay tuned!

Posted by Fuzzy Skinner at 9:15 AM