"A helmet is usually thought to be very heavy, but when one is attacking a castle or something similar, and arrows, bullets, large rocks, great pieces of wood, and the like are coming down, it will not seem the least bit so."
- from the 11th chapter of Hagakure

Helmets have been around since the literal beginning of D&D as a commercially available product, but their actual use in play has never been straightforward. I won't go into detail on the rules for helmets tucked away in an obscure paragraph of the 1st Edition Dungeon Masters Guide, but instead I'll focus on the edition in which I've logged the most designing time (refereeing time is a close tie with B/X): AD&D 2nd Edition.

The Player's Handbook for 2e has two types of helmet listed: the basinet and the great helm. Their use or employment is never described, even though the designers thought that the people actually reading the rules would need an explanation of what a magnifying glass does. As much as I want to keep things in the core books whenever possible (to cut down on the strain on my back, if for no other reason), the solution is found in supplements.

The Complete Fighter's Handbook (PHBR1) gives several types of helmets, but doesn't provide specific rules as to what helms should be used with what armor. I realize that such is a task I could undertake myself, but there's little point in doing so if someone else has already done it. In Player's Option: Combat and Tactics, there are more specific rules for different helmets, along with corresponding Armor Class values.

In my current house rules, I use helmets a little bit differently (though still heavily inspired by both of those books), so I'll provide the pertinent rules below.

A helmet can be worn with different armor (i.e., wearing a great helm with bronze plate), although in some cases this will look off-putting to observers, though not usually resulting in any penalty to interaction. A mail coif can be worn underneath a great helm; this does not provide a bonus to protection, but still allows some protection for the head if the great helm must be removed.

The main function of helmets is to prevent called shots being made to the head. If the head is unarmored, it has AC 10, and a successful called shot will deal the maximum possible damage for that weapon (so a long sword against a Medium opponent would deal 8 points of damage, plus Strength bonus if applicable).

Unofficial Rule (need to test this out in play first): A natural 20 on a called shot to the head will result in the target being instantly reduced to 0 hit points, thereby falling unconscious and "hovering on death's door".
Posted by Fuzzy Skinner at 3:09 PM No comments:

My previous post on the lack of creativity in the modern "hobby" reminded me of a quote from Ed Wood:

The only place where such retreading is this common is in the movie industry, although I have to say that (for the most part) things have slowed down a bit since the heady days of the 1920s through the 1940s, when a movie might be remade several times within the same decade.

Posted by Fuzzy Skinner at 12:00 PM No comments:

The Matter of Magic

After Ozymandias expressed some curiosity as to the specific attributions alluded to in this post, I decided to write this up here - both to share it with anyone else who might find it useful, and to create yet another backup of this information should my hard drive and cloud storage fail. I was concerned about my players finding it, but my players are becoming less and less of a factor in my ongoing development of my campaign setting (largely by "substance of absence", or in layperson's terms, "not showing up"). Even if they find this blog, they'll still have to create a wizard to take advantage of this information.

Note that the first section is mostly a primer for those unfamiliar with AD&D 2nd Edition's magic system (as I'm intending this to be useful as a handout to players in the future); if you're already familiar with it, go ahead and skip down to "Correspondences".

The Schools of Magic

Wizard spells (also called "arcane magic" or "thaumaturgy") are each classified into one or more schools defining their function. There are eight of these schools in total, although there is a ninth "pseudo-school" that is sometimes added to these (described below).

Abjuration spells are protective in nature, shielding the caster or others from mundane or magical effects. Specialists in this school* are called abjurers; the schools opposed to Abjuration are Alteration and Illusion/Phantasm.

Alteration (also called Transmutation) spells reshape the environment or the caster in some way; these spells are among the most common ones used by wizards. Specialists are called transmuters; the opposition schools are Abjuration and Necromancy.

Conjuration/Summoning spells call forth objects or beings from other planes, to serve various functions. Specialists are called conjurers; the opposition schools are Divination and Invocation/Evocation.

Divination spells seek to gain information about people, places, or things, in the present or future. The spells of the fourth level and below in this school are sometimes referred to as "Lesser Divination", as they may be learned by any mage or specialist; only the "Greater" spells of the fifth level and above are forbidden to certain specialists. Those who specialize in this school are called diviners; the only opposition school is Conjuration/Summoning.

Enchantment/Charm spells seek to affect either beings or items in some fashion; the former tend to be mind-affecting and temporary, while the latter are permanent if the right conditions are met. Specialists are called enchanters; the opposition schools are Invocation/Evocation and Necromancy.

Illusion/Phantasm spells are focused on creating effects that only seem real, often attempting to disguise themselves as the work of other schools. The specialists of this school, illusionists, are among the most common of all specialist wizards (not that specialists themselves are all that common!); their opposition schools are Abjuration, Invocation/Evocation, and Necromancy.

Necromancy spells manipulate the energies of life and death for various purposes, with many spells involving the undead in some fashion. Specialists are called necromancers; the opposition schools are Enchantment/Charm and Illusion/Phantasm.

It is important to note that some spells fall under more than one of these schools. A select few - such as the 1st-level spell cantrip - are classified under all eight of these schools simultaneously, because they can be cast using any of the methods and energies available to a wizard.

* (In my current house rules, the only specialist wizards allowed are illusionists; this may change in the future, and in any case the reader is free to do as they please.)

The following table gives a summary of the attributions of various qualities and types of matter to the eight schools, as well as certain other parts of existence.

Certain terms here bear explanation. Pachyderms are considered mammals in the modern "real" world, yes, but to a pseudo-medieval mindset, elephants and rhinoceroses would seem pretty strange animals. Similarly, the category of "live-rearing fish" includes dolphins and whales as well; the attribution of this category to the Patron Saint of Executioners is because of the legendary viciousness of certain species of sharks, and their popularity as animals of execution in the Principality of Le'var. And as the Patron Saint of Warriors (St. Girtus) traditionally has a longsword as his weapon, what better representative in the animal kingdom than the swordfish?

Finally, "Primortal" refers to St. Desial's title "Patron of All Mortals"; they are traditionally thought to be the first ancestor of all mortal races, including humans, demihumans, and humanoids. (I thought of the contraction as I was making the table, and it just seemed too cool - in a Katanas and Trenchcoats way - to pass up.)

And here's an edited version of the eight-color wheel, with my terrible Microsoft Paint skills used to add the school symbols from the reprinted 2nd Edition Player's Handbook. 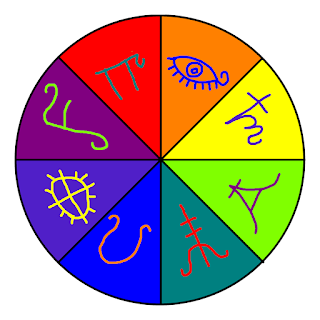